For the first time in a decade, the reigning MotoGP world champion will begin their title defence carrying the #1 plate.

By:
Lewis Duncan
Listen to this article

Though Ducati shot its bolt a day early by accidentally revealing 2022 MotoGP title winner Francesco Bagnaia would be running the #1 on its website, that fact was finally confirmed on Monday morning at the Italian marque's launch event in the Dolomites.

And thus the debate over the draw of the #1 plate continues: fans either feel passionate that a world champion must carry the #1 plate, as if it were some sort of birthright or – like this writer – you don't really care either way.

The #1 hasn't appeared on the front of a MotoGP bike since 2012, when Casey Stoner rode what would be his final season in the series with the number to mark his second world title. It's fitting, then, that Bagnaia – who ended Ducati's 15-year drought last season since Stoner's first world title in 2007 – picks up the mantle for 2023 on his Desmosedici.

The arguments for and against are convincing in their own right. Those who are in favour of it call out the fact that not everyone can be a world champion, and running #1 is an assertion of your status as the rider to beat.

They also say it's better for those watching to identify who the champion is. Maybe that would have been the case in the 1990s but, in a world where you can Google anything you want on your mobile phone, not being immediately aware of who the world champion of a series is won't take you long to figure out.

On the other side of the aisle, it can be argued that brand recognition goes out of the window when a regular full-time number is replaced with the #1.

Whether we like it or not, athletes in the modern world are their own brand, and their fans like having a unique identifier to hold onto. There's no more a case in point of that than with Valentino Rossi, who at no point in his grand prix career ran anything other than #46 despite his nine world titles. 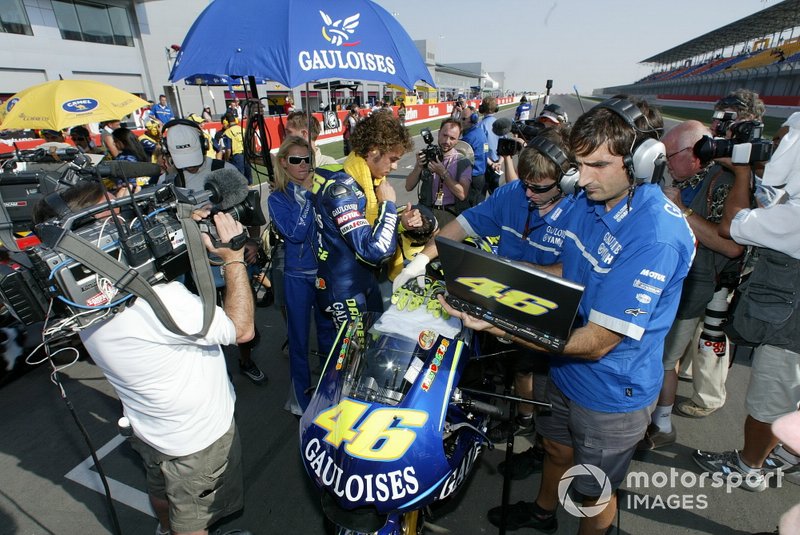 Valentino Rossi resisted the allure of the #1 after his many titles, sticking with the famous number 46

The symbolism of a unique number is a powerful thing. Just as #46 will always be associated with Valentino Rossi, #44 with Lewis Hamilton, #23 with Michael Jordan, and #99 with Wayne Gretzky, it stands to reason that the #63 will hold significance for Ducati fans going forward.

This is something Bagnaia – somewhat contradictorily – noted during Ducati's launch event on Monday: "63 means a lot of things to me and I'm very close to that number. It's true that on my plate I will have the #1, also on my pitboard, but for the rest I will remain with the #63. For many things the #63 will be my number as always, because I think people identify me with the #63."

In a further contradiction, Bagnaia says it would be a mistake for him to consider himself the world champion in 2023 if he hopes to defend his title. That will be something hard to ignore with #1 next to your name on the entry list.

"I think I have to don't do the mistake of thinking I am a champion, because it's something that can relax you," he said. "So, I will try to have the same approach, the same mindset of last year, of all the years in my life.

"I think this year I learned the lessons from the mistakes, so I can start this year better. The new bike is very close to the 2022 bike, so I think we can start well from the first day of testing. The schedule of the weekend is very different, so this can change things. But I'm quite sure if we work well as last year we can be on top."

Regardless, Bagnaia will race with #1 in 2023 and he will try to do something no rider has done in the modern MotoGP era: retain their crown using that number. 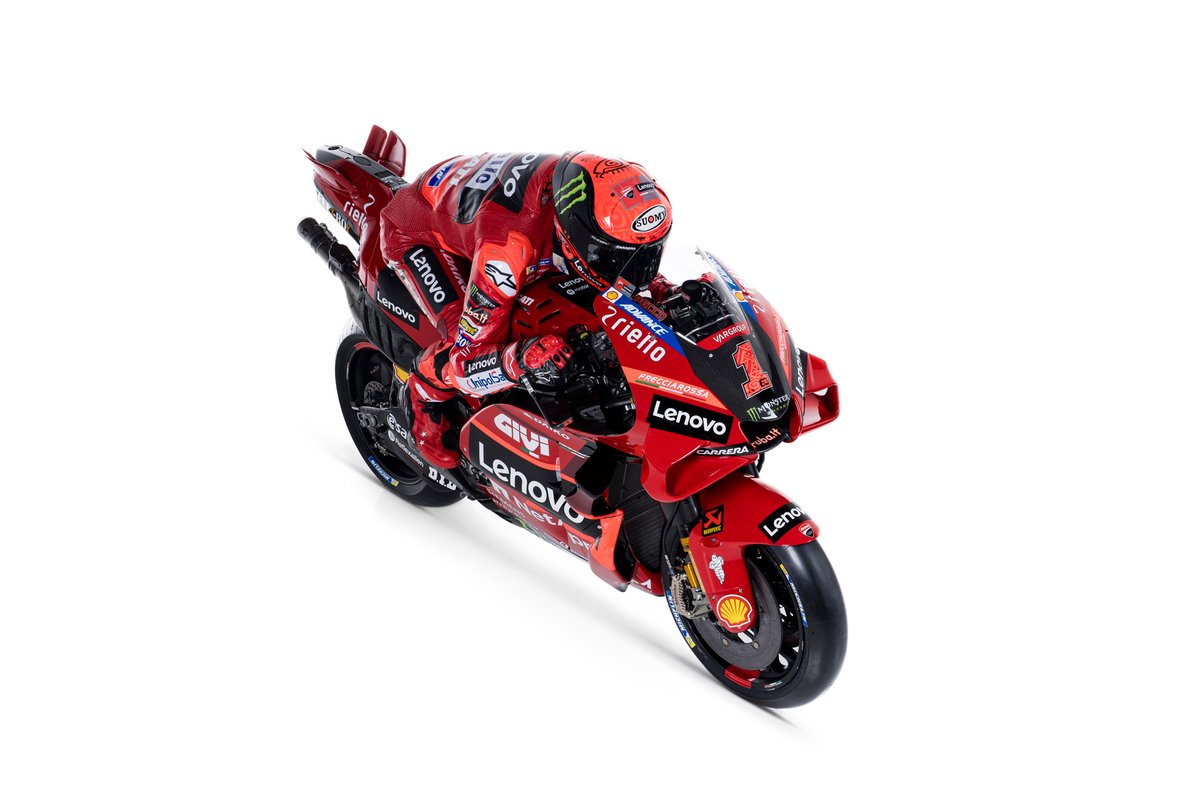 None of those riders did win the title again running the #1 plate, with those since Stoner in 2012 and prior to Bagnaia in 2023 – Lorenzo, Marc Marquez, Joan Mir and Fabio Quartararo – all sticking to their standard race numbers.

Not since Mick Doohan in 1998 has a rider in the premier class successfully defended the #1 plate, when the Australian legend took the fifth and final 500cc title of his career.

If Bagnaia does manage to defend his title in 2023, it will be another bit of history - after becoming the first rider ever to overcome a 91-point deficit and five DNFs in a season to win his first crown – to bolster his legacy. And perhaps it will usher in a change in mindset for future champions when it comes to running the #1.

For now, at least Bagnaia fans can look forward to bagging some heavily discounted #63 t-shirts from last year in January now space has to be made for the new #1 stock!

The hockey expansion rule that could benefit Andretti's F1 bid

Miller: Time at Ducati "a game changer" for my MotoGP career

The other Suzuki signing that could transform Honda's MotoGP form

Following Suzuki's decision to quit MotoGP, both of its former riders have landed at Honda for 2023. But perhaps its biggest signing from the now-defunct team could instead be a highly-rated technical manager. Is Ken Kawauchi the right man at the right time to steer HRC back to glory?

How the MotoGP paddock has offered refuge to Suzuki's former team

Suzuki's unexpected departure left more than 40 professionals virtually jobless for the 2023 MotoGP season. But that human drama has been successfully corrected by the paddock itself, with most former Suzuki crew members absorbed into other operations.

The Petronas Sepang Racing Team came into MotoGP with a bang in 2019 as regular front-runners, with wonder rookie Fabio Quartararo mounting a title challenge in 2020. But it all went wrong for the Razlan Razali-helmed squad as the team changed hands and tumbled down the order - and RNF Racing plans to right this in 2023

Is Marc Marquez ready to reclaim his MotoGP throne?

Marc Marquez’s sixth premier MotoGP title seems a long time ago given the injury woes he has faced in the three years since. At the end of a fraught 2022, in which he had a fourth major operation on his right arm, the Spaniard speaks exclusively to Motorsport.com.

How MotoGP's underachiever is working to reverse its fortunes in 2023

As European manufacturers emerged as the strongest force in 2022 in a changing of the guard for MotoGP, one powerhouse couldn’t quite match the feats of Ducati and Aprilia. Its motorsport chief tells Motorsport.com why this is and what it is doing to become a consistent frontrunner in the class of kings

With the expansion of the calendar to 21 grands prix and the introduction of sprint races, the 2023 MotoGP season will take the riders to almost 1,300 kilometres of more competition than this year, a factor that forces adjustments in their physical preparations.

Surname pressure is something many have had to deal with in their motorsport careers. And while Luca Marini doesn’t have that, his familial relation and the team he rides for in MotoGP have cast a brighter spotlight on his progress. But, as he has shown in 2022 – and as he reveals to Motorsport.com – Marini is so much more than just the brother of a legend.

The 2022 MotoGP season was another hotly contested championship, with Francesco Bagnaia emerging as the title winner after the campaign went to the wire. Motorsport.com picks out the 10 best performers of the season